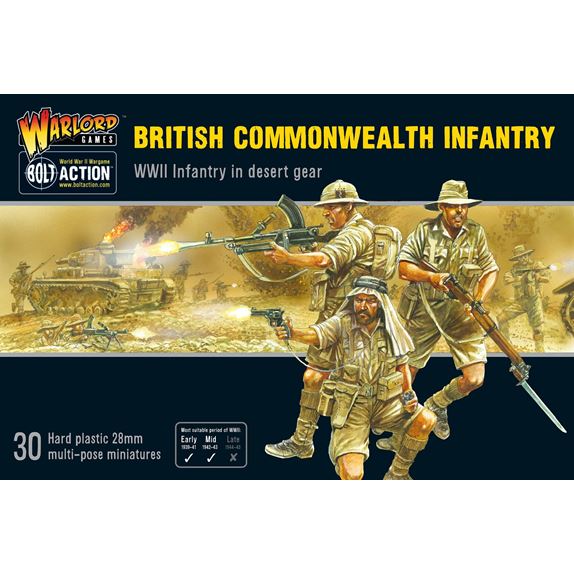 Use the New Bolt Action British Commonwealth plastic infantry, based on the 8th army plastic with heads to represent Australian,… Read More

Use the New Bolt Action British Commonwealth plastic infantry, based on the 8th army plastic with heads to represent Australian, South African, New Zealander and LRDG/SAS troops, to stop the Axis forces in their tracks and defeat the Desert Fox himself, Erwin Rommel.

Fighting for the freedom of the civilised world against the twin fascist threats of Mussolini’s Italy and Hitler’s Germany, the brave men of the British Commonwealth were a multi-national force from Great Britain, Australia, South Africa, New Zealand, India, Canada and other far-flung corners of the world.

The British Commonwealth infantryman was a fearsome opponent whether facing the German Afrika Korps or the Italian Army, whether it be in the parched desert of North Africa or in beautiful yet rugged terrain Italy. This box of highly detailed plastic miniatures allows you to build slouch-hatted Australians, South Africans wearing sun helmets or the men of the Long Range Desert Group, Special Air Service and Special Boat Service.

The special forces of the LRDG, SAS and SBS were an eclectic mix of largely non-conformist characters as befits the vital roles they played in the war. As such their attire was a mix of that of their parent unit, national pride or personal preference! This set is ideal to mix with our plastic 8th Army set with the tin helmets, Scottish Tam-o’shanters and Indian headgear creating a truly unique army on the tabletop!