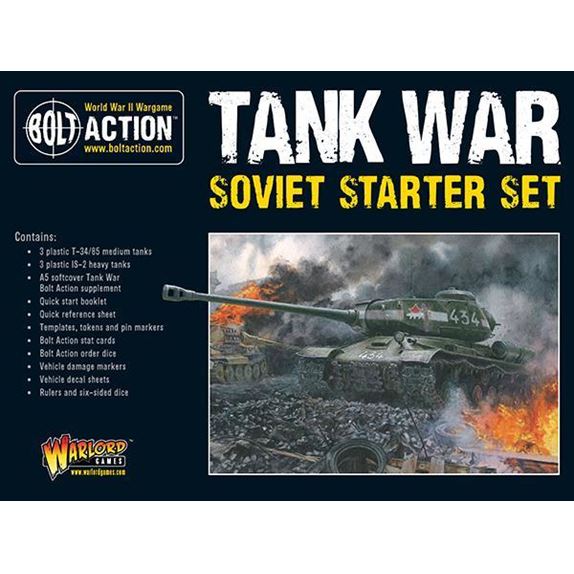 With over 70,000 units produced the T-34 is famous for its unconventional design. When it arrived early in the war… Read More

With over 70,000 units produced the T-34 is famous for its unconventional design. When it arrived early in the war the T-34 became a threat that the German's just couldn't handle. Designed to replace the monster sized KV tank series, the IS-2 was just as big and heavy but was even nastier. Equipped with a massive 122mm gun, its intention was to be a breakthrough tank, demolishing fortifications and clearing enemy positions.

This huge value starter set is filled to the brim with content, here's the breakdown:

Two brutal armoured platoons come from this starter set, both with the potential to break entire armies. Forming the main battle line would be the IS-2s, with tough armour, a gargantuan 122mm gun and 3 machine guns, you can send this platoon to clear the path for the follow-up task force. Which would be the T-34 Squadron, who have plenty of armour and firepower to sweep away whatever remains.

The T-34/85 became to be known as the 'ultimate' version of the T-34 series, combining the revolutionary design alongside an 85mm gun turret, this tank became the apex of battle tanks. Equipped with a heavy anti-tank gun and 2 MMGs, this tank can deal with the heaviest tanks alongside numerous squads of infantry.