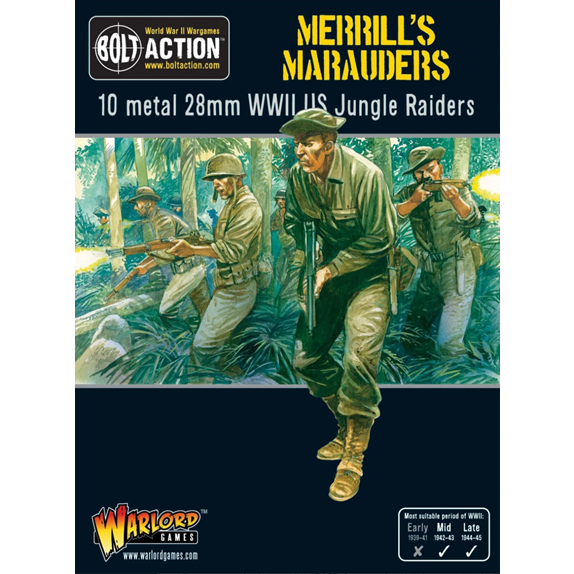 In 1943 the US high command raised a unit to rival the famous British Chindits, men who were to take… Read More

In 1943 the US high command raised a unit to rival the famous British Chindits, men who were to take the war to the Japanese behind their lines. They were officially called 5307 Composite Unit but, under their tough and charismatic leader – Brigadier General Frank Merrill – soon earned their famous name.

These hard-marching, tough volunteers raided Japanese supply lines and airfields, carrying their supplies by mule and by horse. 3,000 strong, the three battalions were equipped with a variety of semi- and fully-automatic weapons, as well as their trademark headgear. They were further toughened by intense training and marksmanship courses.

Their support weapons, man-portable by necessity, consisted of bazookas and 60mm mortars, and even occasionally Boys anti-tank rifles. They fought in numerous raids and earned a reputation for tenacity and jungle-fighting skills, helped on many occasions by native Kachin scouts who knew the terrain of the Burma theatre. Merrill,s Marauders were a tough unit and uniquely each man who served in the three battalions was awarded a Bronze Star medal. Their specialist skills will be of great use to US players in games of Bolt Action.