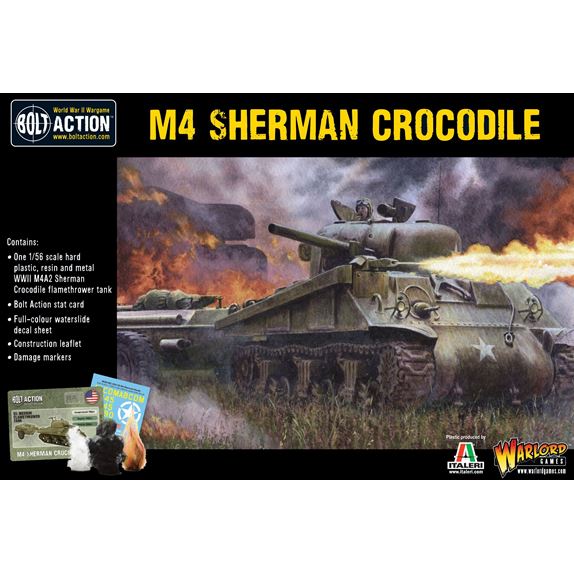 Inspired by the powerful British Churchill Crocodile and their own experiences in the Pacific with other versions of flamethrower tanks the US army ordered some 100 Sherman Crocodile variants from the British, who were recognised as leading the field in Flamethrower technology.

Based on the M4A4 (Sherman V) welded hull the Crocodile retained full operation of its turret and 75mm gun and bow-mounted .30 Cal (7.62mm) machine gun. The flame gun was placed above the Bow Machinegunners hatch. All of the flamethrowing equipment was positioned externally, including the iconic wheeled trailer.

The trailer weighed 6.5 tons and was protected by 12mm (0.47 in) thick armour. A special joint connector known as “The Link” (made up of 3 articulated joints allowing it to move up, down, left or right and swivel on the horizontal axis) allowed it manoeuvre through rough terrain. This link could also be released from inside the crew compartment in case of an emergency, a great design attribute as the trailer carried 400 gallons (1818 litres) of flamethrower liquid and 5 compressed bottles of Nitrogen (N₂) gas!

The flamer worked by using Nitrogen gas to propel the fuel along a pipe running from the rear of the tank, up and along the right flank, to a flame projector mounted on the right upper glacis. The co-driver/bow machine gunner would then operated the flamethrower or his machine gun.

Of the initial order, only 3 M4A4 Crocodiles were actually made and along with a fourth, the prototype M4A2 (Sherman III), seeing action with the 739th Tank Battalion (Special Mine Exploder Unit). They were sent in February 1945 to take part in Operation: Grenade, the assault on the ancient 13th-century citadel in Julich, Germany. Helping demolish the garrison of the old citadel.

There were other flamethrower tank variants used with standard gun Shermans in Europe. Using either the E4-5 or ESR1 Auxiliary Flamethrower that replaced the bow machine gun or the H1 Periscope Mount Flame Thrower, again over the Bow machine gun position. More famously used in battle on Iwo Jima were the main armament flamethrower version that replaced the main gun, known as the M4 POA-CWS H1 (POA-CWS: Pacific Ocean Area-Chemical Warfare Service) built mainly on the M4A3 Sherman.

The Sherman Crocodile is a powerful adversary and ideal for advancing alongside your hand-picked assault troops as the advance on enemy strong points.