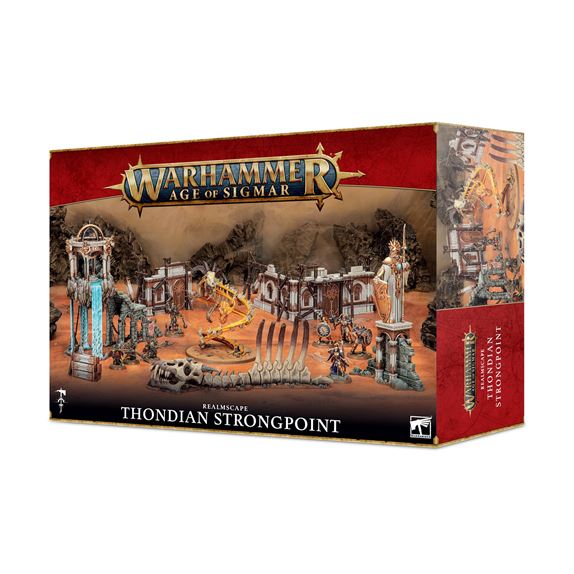 As the Era of The Beast rages on, the savage Realm of Ghur awakens. A wellspring of primordial energy has… Read More

As the Era of The Beast rages on, the savage Realm of Ghur awakens. A wellspring of primordial energy has burst its banks, and the bone-strewn plains and blood-soaked swamps of Thondia are consumed by war. Rival powers battle over arid wastes littered with the ruins of forgotten kingdoms, wary expeditions navigate murky, shifting marshes that echo with monstrous roars, and armies fight for dominance around the skeletons of massive beasts and half-built outposts. Yet all this pales before the rise of a fierce new force in the cosmos: the mystical incarnates, the essence of the realms made manifest.

Realmscape: Thondian Strongpoint is a battlefield in a box for Warhammer Age of Sigmar, comprising a range of scenery pieces and gaming boards inspired by the Ghurish alpha-continent of Thondia. It also includes the Krondspine Incarnate of Ghur – a powerful, unpredictable monster born from the energies of Ghur itself that can be added to armies of any faction. This varied assortment of half-built outposts, ominous skeletons, and exotic wonders is fully compatible with existing scenery, making the Thondian Strongpoint an excellent way to start or expand your terrain collection – it will also save you money compared to buying the contents individually.

Rules for using the Krondspine Incarnate of Ghur in games of Warhammer Age of Sigmar can be found in Season of War: Thondia, along with additional rules for bringing the mysterious terrain of Thondia to life on the tabletop.

The set also includes two double-sided folding gaming boards measuring 30" x 22.4", allowing you to build a battlefield suitable for games of up to 1000 points in Warhammer Age of Sigmar. These durable boards depict the wild reaches of Thondia – each features an uninviting, boggy marsh with half-sunken flagstones on one side and an arid desert littered with massive bones and half-buried ruins on the other, and can be combined with other gaming boards to create battlefields of any size.