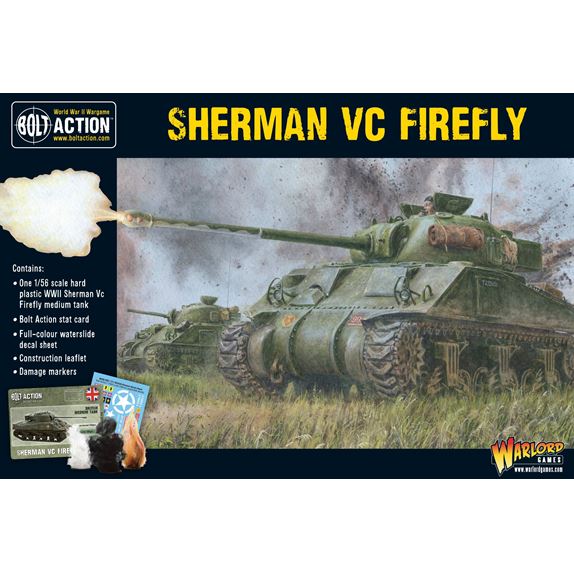 Bane of the heavy German armour, the Sherman Firefly was the British invention that mounted the powerful 17 pdr anti-tank… Read More

Bane of the heavy German armour, the Sherman Firefly was the British invention that mounted the powerful 17 pdr anti-tank gun in a Sherman V. Our model is based on the later Sherman V and is now available in plastic to tear apart Panthers, Tigers et al at your command...

This is a variant of the American Sherman equipped with a powerful 17 pounder anti-tank gun. It soon became highly valued as the only British tank capable of defeating the Panther and Tiger tanks it faced in Normandy at standard combat ranges. In recognition of this, German tank and anti-tank gun crews were instructed to attack Fireflies first. Between 2100 and 2200 were manufactured before production wound down in 1945.

Often known as the 'Charlie' tanks in the field because of the 'c' denoting them as rearmed with the 17-pdr. There were enough of them by D-Day to issue 1 per troop, providing the British with a good answer to the threat of the German big tanks.

As with all of our plastic vehicle kits, the Firefly comes with its own sheet of waterslide decals with a variety of unit markings, tank names, and other identifying markings to give your model that additional touch of realism when it takes to the tabletop battlefield!