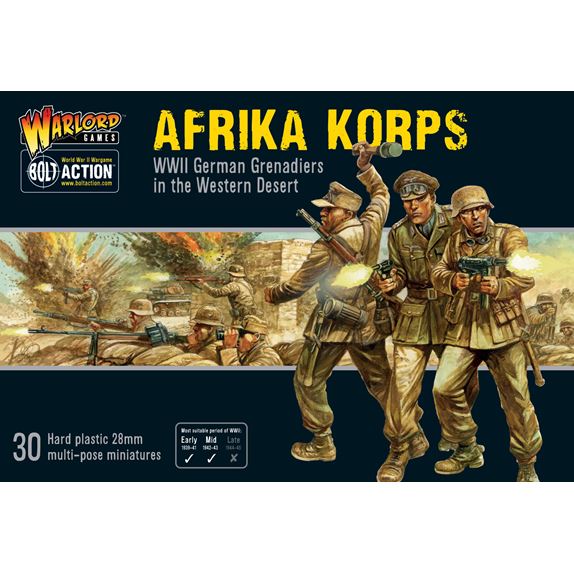 Sent to bolster their beleaguered Italian allies facing the combined forces of the British Commonwealth in North Africa, the Deutsches… Read More

Sent to bolster their beleaguered Italian allies facing the combined forces of the British Commonwealth in North Africa, the Deutsches Afrika Korps proved a dangerous opponent. Commanded by the legendary Erwin Rommel, the Afrika Korps fought a series of ferocious battles in Egypt and Libya as each side pushed the other to breaking point.

Fighting in what was referred to as the last 'Gentleman's War', the German soldier was well respected by those he faced, be they British, Australian, Indian or other nationalities. German tactics in the desert had a profound and deadly effect on how the British armour and infantry formations interacted with one another and these lessons were learnt for the later conflicts in North West Europe.

The Afrika Korps foot troops were more than ably supported by the dreaded '88' (8.8cm Flak) gun as a direct fire weapon and the ubiquitous Panzer IV was developed into what the British troops referred to as the 'Pz IV special' - a tank the British tank commanders learnt to fear and respect in equal measure. Battles at El Alamein, Tobruk and Gazala honed their fighting capability, pushing the British High Command into changes that would bring eventual victory in the desert campaign.

Supplied with a variety of headgear and weapon options Warlord Games' highly detailed and dynamically posed Afrika Korps are ideal for fighting in North Africa as well as into the Tunisian and the Italian campaigns.