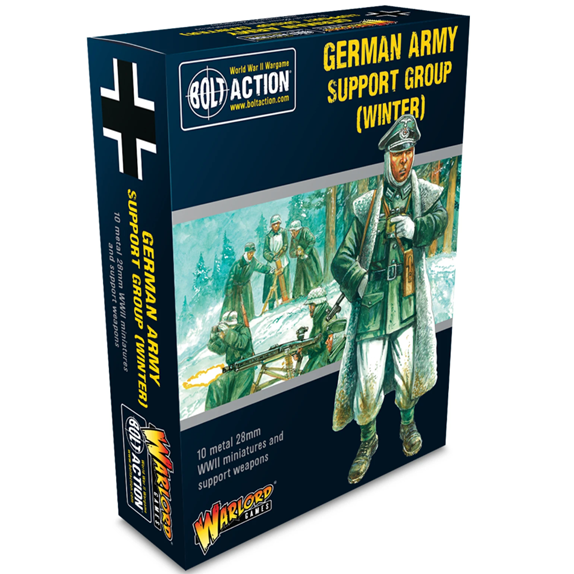 German officers were capable and often experienced leaders. Junior officers were trained to undertake the role own immediate superiors, enabling them to use their intuition to take control of situations when necessary.

An officer unit consists of the man himself and can include up to 2 other men acting as his immediate attendants. Because of the high quality of the majority of German officers, the Bolt Action rules rate them as regular or veteran.

Known as "Hitler's Buzzsaw" on account of its high rate of fire. The MG42 fired 1250 rounds/minute, more than twice that of the British Vickers Machine Gun and American Browning. Add this tremendous firepower to your Germans and give your infantry some much-needed support.

Unlike other armies, the Germans used the same machine gun both as a squad weapon and as a tripod-mounted support weapon. The tripod mount provided a much more stable firing platform and made it easier to keep up a continuous fire using a belt feed.

The Standard medium mortar for the Germans in WW2 was the Granatwerfer 34. It was a very effective and accurate weapon that could provide long range, on call fire support. It's crew could carry it in 3 pieces: base plate, tube and bipod. With enough ammunition it could maintain a rate of fire of around 15 to 20 rounds per minute out to a maximum range of 2,400 meters.