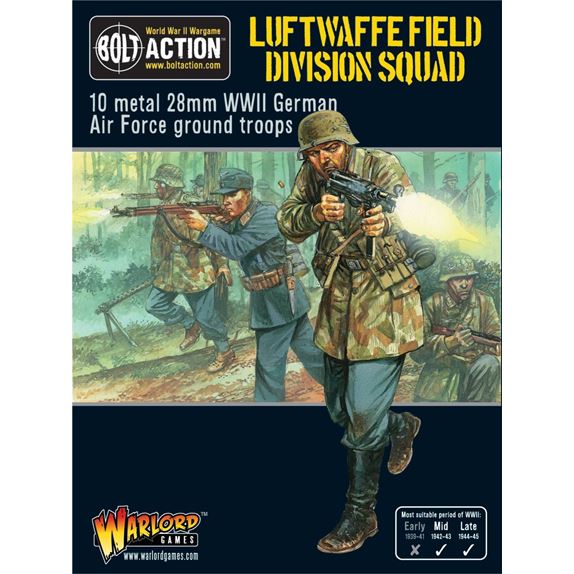 After the the initial spectacular success of the German invasion of Russia in 1941 the invasion slowed to a crawl as the weather and hard fighting ground down their formations. Desperate to shore up the front seven regiments were formed of non-flying personnel taken from the German air force, the Luftwaffe. These regiments were equipped with standard infantry weapons, and sent to quieter areas of the front to gain experience.

As the war continued more and more Luftwaffe personnel were drafted into what became Luftwaffe Field Divisions, 21 divisions being formed with 12,500 men in each at full strength. They wore the trademark Luftwaffe blue/grey uniforms and many also donned the long camouflaged M1942 jacket or zeltbahn tent capes.

Despite their poor levels of training, they fought bravely in Normandy, in Italy and on the Russian front. The average age of the soldier in these units was 30 years old - much older than other front line troops. These difficulties led them to take more casualties than the regular army units but despite these shortcomings Luftwaffe Field Division troops earned 18 of the coveted Knights Cross medals in the three years that they saw service.