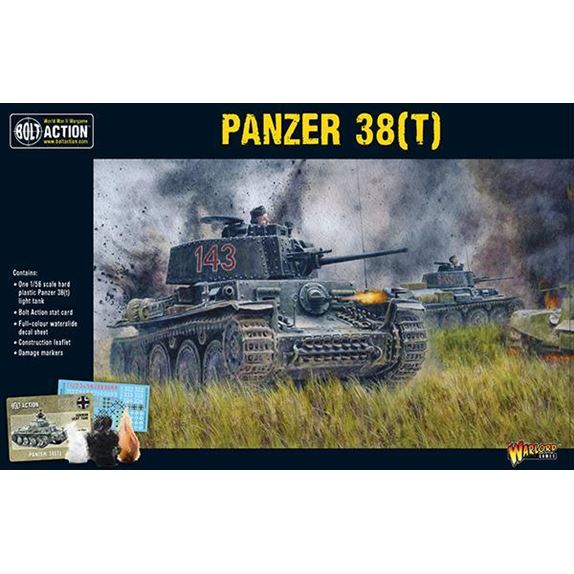 Most commonly known as the Panzer 38(t), this light tank was originally a Czech design – the LT vz. 38… Read More

Most commonly known as the Panzer 38(t), this light tank was originally a Czech design – the LT vz. 38 – which fell under the Third Reich's control when Germany occupied Czechoslovakia in 1938. The 't' in its designation relates to the German for Czech – tschechisch.

Well-liked by its crews for its dependability and ease of repair, over 1,400 38(t)s were produced and saw active service for Germany during the invasion of Poland, the Battle for France and on the Eastern Front.

Its light weight made it ideal for use as a fast attack or reconnaissance vehicle. With its armament being considered too light against the increasingly heavier enemy vehicles, manufacture of the 38(t) ceased in 1942. It would continue to serve for the rest of the war both with German and Hungarian, Romanian and Bulgarian militaries (the waterslide decal sheet included allows for variants of each of these nations to be built).

The reliable 38(t) would continue to serve the Wehrmacht well by providing the basis for several highly successful variants such as the Hetzer and Marder tank destroyers, as well as flakpanzers.