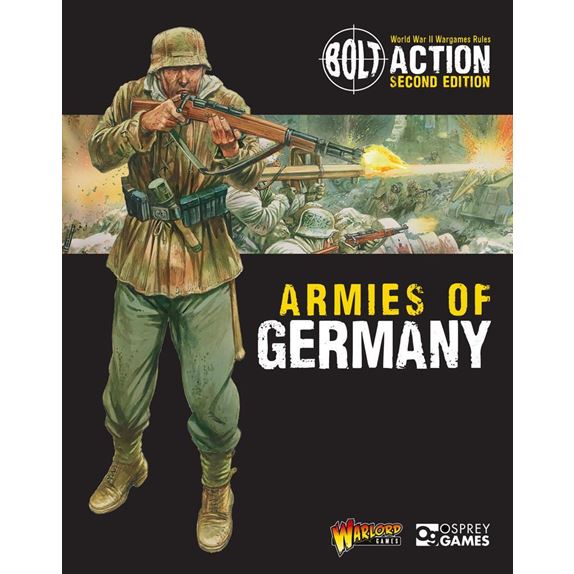 'Armies of Germany 2nd Edition' is a supplement for our award winning tabletop wargame Bolt Action, and deals with the… Read More

'Armies of Germany 2nd Edition' is a supplement for our award winning tabletop wargame Bolt Action, and deals with the German Army of World War II. Within you will find background and details of the German Army’s organisation and equipment from the beginning of the war (the invasion of Poland in 1939) to the very end (the fall of Berlin in 1945).

Central to this book is its Army List. This includes all the information you will need to play games using the German Army. This large list details all the main troop types, vehicles and equipment fielded by the Germany Army during World War II. Alongside this main list are a number of Theatre Selectors, which give the force details for different periods and theatres of the war. These are not definitive, but are designed to give a theatre-specific flavour and character to a force. Over six years of fighting the German Army changed a lot, and many units and vehicles that were common in 1939 were obsolete by 1945 - and there were countless oddities and exceptions on every front. These sub-lists allow players to select forces suitable for the theatre in which they are playing.

We've taken the opportunity to include additional units and options, we've revised a few points costs here-and-there, and made some more changes to bring the book more in-line with the rest of the range... here's a teaser of what you'll find inside...

German forces now have FOUR Army Special Rules - some of which you'll be familiar with, some you won't...

Couple all of this with tactical notes, invaluable historical background text, gorgeous artwork and reference imagery from the masterful Peter Dennis and Osprey Publishing, and Armies of Germany 2nd Edition is the must-have Bolt Action book for all German generals out in the field!