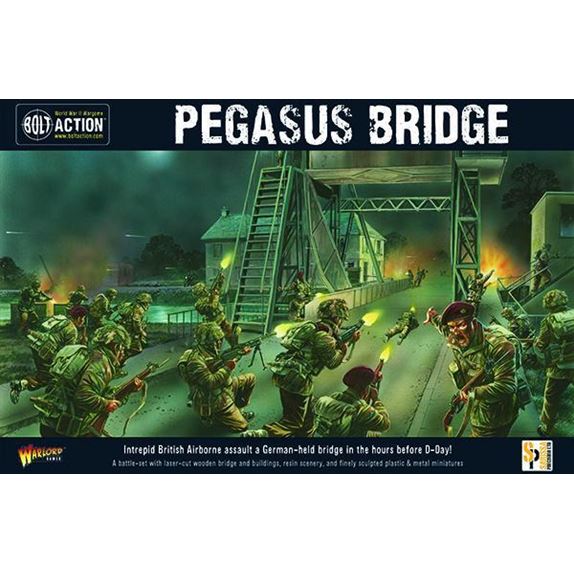 This remarkable laser-cut replica of Pegasus Bridge, along with scenery representing other key features of the battle site such as… Read More

This remarkable laser-cut replica of Pegasus Bridge, along with scenery representing other key features of the battle site such as the Café Gondrée, gun emplacement, machine gun posts and bunker are all included in this superb battle-set, allowing you to recreate the battle on the tabletop. Can your valiant glider troops take the bridge or will the Germans see you off before reinforcements arrive?

In the hours before the Allied invasion of Hitler’s Europe was to begin at Normandy, a number of key points had to be neutralised lest the Allied troops be thrown back into the sea and to give the Allies the opportunity to disrupt German reinforcements heading towards the landing beaches.

One of these vital targets was the swing bridge over the canal at Bénouville.

In the early hours of 6th June 1944, the men of D Company, 2nd Oxfordshire & Buckinghamshire Light Infantry, led by Major John Howard, landed by glider – the first British troops to land on D-Day.

The Bénouville bridge was guarded by machine gun posts, an anti-tank gun emplacement and a machine gun bunker, but the pinpoint glider assault caught the German defenders unprepared. After a vicious firefight, the highly-trained British soldiers captured the bridge and prepared defences for the inevitable German counter-attack, which they successfully repelled. The victorious British 6th Airborne Division could now protect the eastern flank of the Allied landings.

To recognise their bravery and sacrifice, the Caen Canal Bridge was renamed ‘Pegasus Bridge’ by the local population, inspired by the distinctive divisional badge of the 6th Airborne Division.