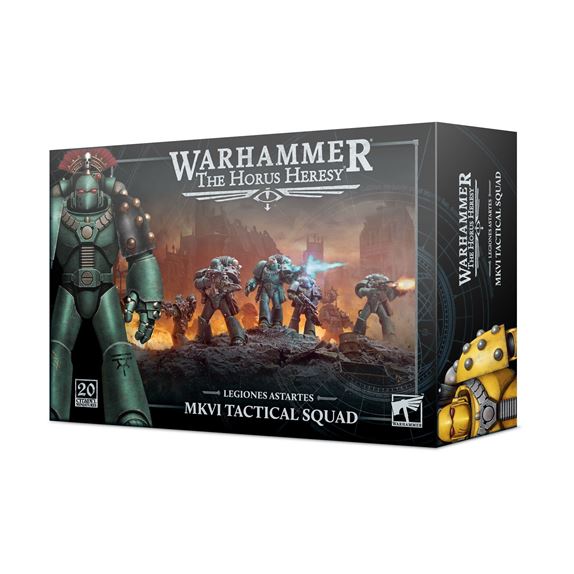 Tactical Squads are the mainstay of the Space Marine Legions, highly versatile infantry units that can attack or defend at… Read More

Tactical Squads are the mainstay of the Space Marine Legions, highly versatile infantry units that can attack or defend at will, assault heavily fortified positions, and take and hold strategic objectives – or simply slaughter the enemy – in almost any terrain or situation. All 18 Legions make heavy use of Tactical Squads in different ways – it is by the fighting power of thousands of superhuman warriors such as these, armed with deadly bolters and armoured for battle in the harshest of war zones, that the Imperium has beat a bloody path across the galaxy at the head of the Great Crusade.

MKVI 'Corvus' Power Armour is the most advanced mark of power armour approved for mass production at the time of the Horus Heresy, featuring an iconic 'beakie' helmet packed with additional sensor equipment. Production of these suits continued even as Forge Worlds were rocked by vicious civil wars, and the armour became commonplace in the years following the end of the Heresy.

This multipart plastic kit builds 20 Space Marine Legionaries, which can be fielded in games of Warhammer: The Horus Heresy as a Legion Tactical Squad of 20 models, or two units of 10 models. Each of these Legionaries is armed with a Umbra-pattern bolter and bolt pistol, with a variety of additional components such as grenades and pouches, and can also be equipped with a bayonet or chain bayonet for melee fighting. You can also build up to two Legionaries with a Legion vexilla, two with a nuncio-vox, and two with an augury scanner. Accessories and alternate heads are included to build a Legion Tactical Sergeant for each of your squads – the kit offers a variety of extra weapon options for these unit leaders, including plasma pistols, power swords, power fists, and lightning claws. These models have no Legion markings, allowing Warhammer hobbyists to paint them in whichever colours they choose – however, the box includes a transfer sheet with 339 optional markings and iconography for the Sons of Horus and Imperial Fists Legions.