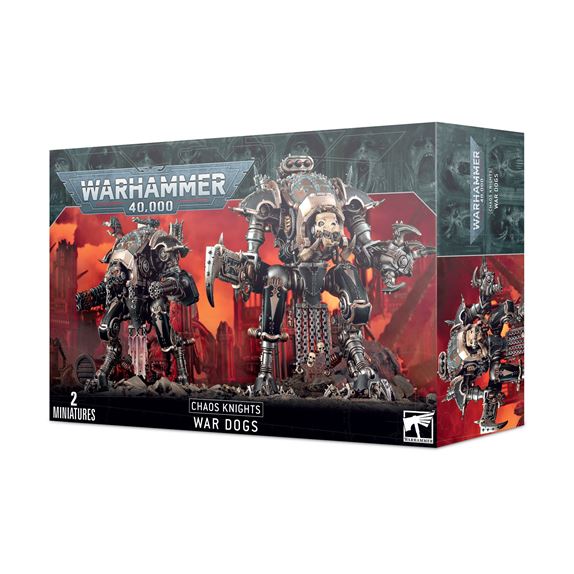 Nimble and responsive combat walkers, War Dog-class Knights act as hunting packs for their Dread Household. Stalking ahead of the… Read More

Nimble and responsive combat walkers, War Dog-class Knights act as hunting packs for their Dread Household. Stalking ahead of the terrible shadow cast by the larger Knights, the corrupt War Dogs guard flanks and devastate enemy scouts to keep their colossal masters from being surrounded, desperate to kill for the Ruinous Powers. Among these vicious engines, War Dog Executioners employ long-barrelled autocannons to maximise their kills at a distance, hammering the foe into submission as they compete to reap ever-greater murderous tallies.

This multipart plastic kit builds two War Dog-class Knights – either War Dog Executioners or War Dog Huntsmen. War Dog Executioners are a long-ranged Lords of War choice that can provide vital fire support to your Chaos Knights army – or be taken as a wandering Dreadblade pack for other Imperium forces. Armed with a pair of long-ranged autocannons and your choice of a carapace-mounted diabolus heavy stubber or daemonbreath meltagun, each War Dog Executioner can be further customised with a variety of articulated poses, armour plating, and six unique faceplates, with large carapaces making for a perfect painting project. This kit can also be assembled as a pair of Armiger Warglaives or Armiger Helverins for Imperial Knights armies.

This kit comprises 148 plastic components, and is supplied with 2x Citadel 100mm Round Bases. Also included is an Armiger transfer sheet featuring heraldry for Imperial Knights, ripe for corruption.