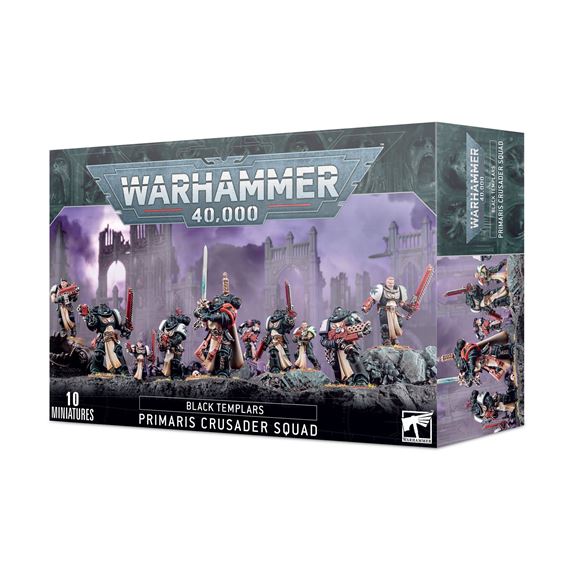 Infused with the post-human might of the Primaris miracle, these Crusader Squads storm into battle with bolt rifles blazing and… Read More

Infused with the post-human might of the Primaris miracle, these Crusader Squads storm into battle with bolt rifles blazing and Astartes chainswords howling. Initiates aim jets of fire from their pyreblasters or swing crackling power fists into their foes, while hard-eyed Neophytes fight furiously to prove their martial worth.

Lead by a Veteran Sword Brother, Crusader Squads mix brand new Primaris Initiates in with Neophytes testing their mettle. Like many Black Templars squads, they are equipped with a range of melee and ranged weapons.

Alternatively, one Initiate can be built as a Sword Brother, who has a choice of helmeted and unhelmeted heads. He can be built with a power sword or power axe, and a heavy bolt pistol or pyre pistol.

The four Neophytes have four unhelmeted head options and can be equipped with either bolt carbines or bolt pistols and Astartes chainswords.

The kit is comprised of 228 plastic components, with which you can assemble Primaris Crusader Squad, containing six Primaris Initiates and four Neophytes with a choice of weapon options. Alternatively one Primaris Initiate can be built as a Sword Brother.