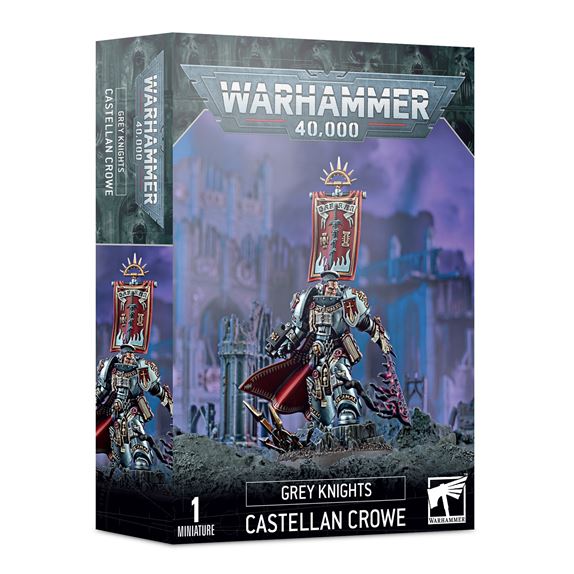 Castellan Garran Crowe is the Champion of the Order of Purifiers, and his flawless soul radiates outward in a searing… Read More

Castellan Garran Crowe is the Champion of the Order of Purifiers, and his flawless soul radiates outward in a searing psychic aura. He is the keeper of the Black Blade of Antwyr, a daemon sword that whispers promises and threats to corrupt those who wield it – a temptation against which Castellan Crowe proves himself at every waking moment, forgoing the blade's dark powers in favour of his own masterful combat prowess.

Castellan Crowe is an incorruptible warrior and a potent HQ choice for any Grey Knight force. A peerless duellist, Crowe can seek out and strike down enemy characters with the cursed Black Blade of Antwyr, his indomitable will allowing him to fight through wounds that would fell another Space Marine. A potent psyker in his own right, Crowe can also unleash gouts of psychic flame at his enemies.

This 18-piece plastic kit builds one Castellan Crowe, who can be assembled with a bare head or a knightly helmet. It is supplied with one 40mm Citadel Round Base.