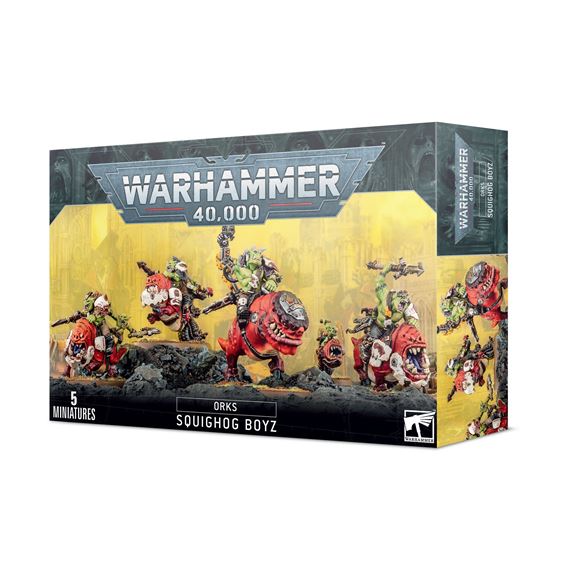 Bipedal wrecking balls that charge ahead of the Ork lines, Smasha Squigs live in a state of near permanent concussion… Read More

Bipedal wrecking balls that charge ahead of the Ork lines, Smasha Squigs live in a state of near permanent concussion thanks to their tendency to headbutt everything. Only the surliest and most aggressive Orks can wrangle them towards enemy lines, but the resulting impact of a charging unit of Squighog Boyz is worth it as they crumple metal, flesh, and bone alike.

If their impressive charges weren't enough, units of Squighog Boyz also hurl explosive, rokkit-propelled stikkas at their enemies, softening up any tough armour in the process. Behind each boy clings an unfortunate saddlegit, who pelts foes with anything it can get its grubby mitts on – while praying to Gork that they don't end up being flung off and trampled in the process. Packs of Squighog Boyz are often accompanied by Bombsquigs – living weapons that demonstrate an alarming lack of self-preservation as they careen into the thick of combat before detonating with killer intent. If you need to crack a fortified enemy line or blow a hole in a phalanx of vehicles, look no further than this squig-powered maelstrom of carnage.

This kit builds one Nob on Smasha Squig, three Squighog Boyz, and one Bomb Squig. The Nob can be built wielding either a slugga or a big choppa, with the other option mounted on the squig's back. Other cosmetic options let you customize your Nob on Smasha Squig with a choice of two heads and two pauldrons.

The Squighog Boyz are armed with rokkit-propelled stikkas, and many of their limbs – and those of their mounts – have been replaced with bionic enhancements.

The kit is comprised of 104 plastic components which allows you to assemble one Nob on Smasha Squig, three Squighog Boyz, and one Bomb Squig, and is supplied with 1x 90mm Oval Base, 3x 75mm Round Base, and 1x 25mm Round Base.