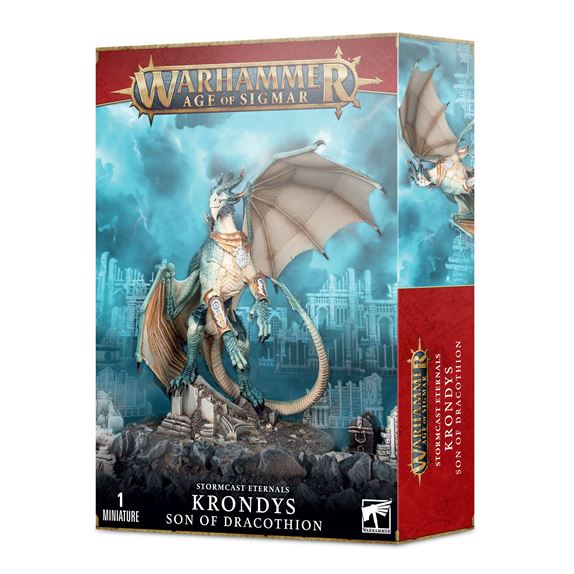 Long ago, before Sigmar was plucked from the heavens by the great drake Dracothion, the powerful Draconith empire was brought… Read More

Long ago, before Sigmar was plucked from the heavens by the great drake Dracothion, the powerful Draconith empire was brought low at the hands of Kragnos, whose divine rampage smashed city after city until only a handful of Draconith remained. In a desperate gambit to defeat what they could not kill, the princes Krondys and Karazai enlisted the aid of the enigmatic Lord Kroak to seal Kragnos beneath a mountain, where he stayed until the Necroquake sundered his prison. With the God of Earthquakes returned, the Draconith princes have sworn the Pact Draconis with Sigmar and lead a new generation to war against the enemies of Order.

As an ancient and powerful being steeped in celestial magic, Krondys is a potent mystical force on the battlefield capable of unleashing debilitating storms on command. His magical might is matched by his prowess in melee, able to sweep entire regiments from the battlefield with a casual flick of his massive wrist, while foes are burned to ash by blazing tempests of draconic fire.

This multipart plastic kit is comprised of 55 pieces with which you can assemble one Krondys, Son of Dracothion, with the option to instead build his fellow Draconith prince Karazai the Scarred. The kit includes 1x Citadel 160mm Round Base