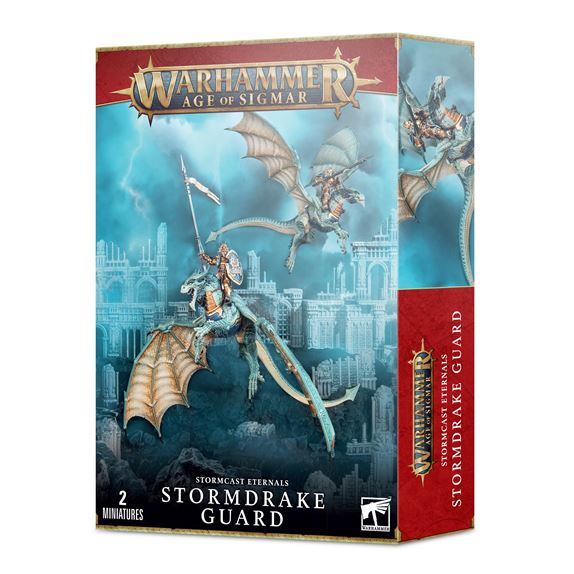 With the Pact Draconis sworn between Sigmar and the drake-lords Krondys and Karazai, the Draconith set forth to fight back… Read More

With the Pact Draconis sworn between Sigmar and the drake-lords Krondys and Karazai, the Draconith set forth to fight back against a resurgent Kragnos and reclaim their ancestral lands. Some choose to bear heroic Stormcast Eternals into battle, evaluating chosen Stormcasts for weeks on end before forming a symbiotic pact between dragon and rider. Borne on powerful wings, these Stormdrake Guard swoop down on any foes unfortunate enough to get in their way, destroying hordes of lesser beings with blade, flame, and claw.

Smash through enemy lines with the might of Sigmar's Draconith allies, bearing elite warriors of the Extremis chamber. These fast and deadly Monster units are just as capable of roasting their foes with wyrmflame as they are skewering them on the ends of lances and swords, and pose a mortal threat to enemy champions who think themselves safe behind their lines. Their ancient Draconith heritage also lends them an innate resistance to magic, frustrating the efforts of wizards who hope to twist arcane power against such noble creatures.

This multipart plastic kit consists of 105 pieces and builds two Stormdrake Guard in several different poses, each able to equip either a drakerider's lance or warblade. It also provides options to construct one as a Knight-Draconis, a powerful Hero capable of supporting nearby Stormdrake Guard. This kit comes supplied with two 105mm Citadel Oval bases and two flying stands